A Cornish language translation of the Communist Manifesto is to be launched in Truro on Saturday 29 October. Translated by a Cornish communist who uses the pen-name Penruth, the booklet will be launched at a public meeting in the Railway Tavern, next to Truro station, at 7pm. Mr Ray Chubb (Map Essa) of Agan Tavas (Our Language) has checked the translation and will be present at the launch.
The booklet is published by the Communist Party of Britain. Mr Ken Keable, the party’s District Secretary for South West England and Cornwall, says, “The decision to publish this translation is symbolic of our support for Cornish culture and the Cornish language and for the aspiration of Cornish people to have the special status and needs of Cornwall to be acknowledged. We also hope that Deryvadow Party an Gemynwer will be a useful addition to the body of literature in the Cornish language.”
“Published in German in 1848, the Manifesto of the Communist Party, by Karl Marx and Frederick Engels, contains the first and most complete summary of the theoretical principles of Marxism and of the strategy and tactics of Communism” said Mr Keable. “By any standards, it is a historic document. It is still remarkably relevant today, if only because of its analysis of the problems of the capitalist system that we see all around us, with gross inequality, mass unemployment, periodic crises and perpetual wars.”

Mr Owain Holland, General Secretary of the Young Communist League, who lives in Cornwall and is a Cornish language user, will chair the meeting. The 30-page booklet will be on sale at £2. 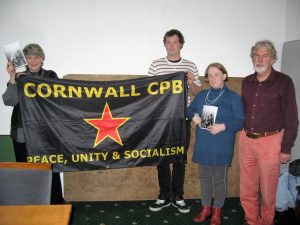 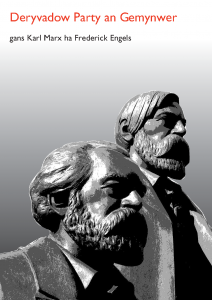 Be the first to comment on "Deryvadow Party an Gemynwer"