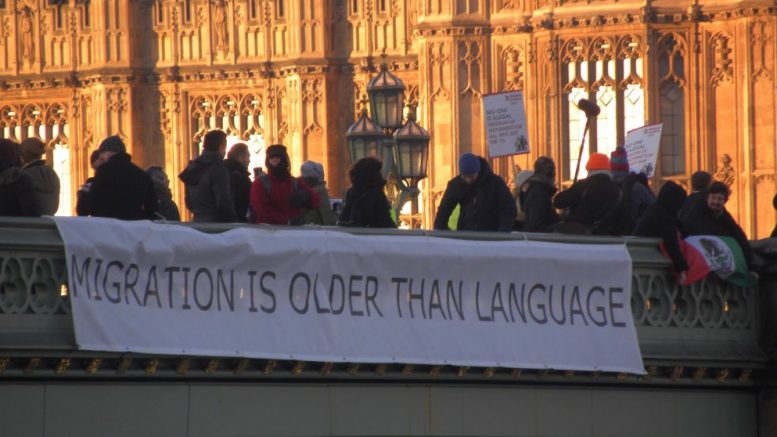 SOLIDARITY with all those marking One Day Without Us this weekend and to all Britain’s foreign-born residents who contribute so much to our society.

The organisers of the second national day of action celebrating migrants and highlighting the work they do can be proud that events are taking place all over Britain under the One Day Without Us banner.

Sustained rises in hate crimes make it all the more important that Britain’s left takes a stand against racism. The 80,393 recorded hate crimes in 2016-17 marked the largest annual increase since Home Office figures began.

It’s common to blame Brexit for the rise in attacks, and there was a notable spike in hate crimes around the time of the EU referendum in 2016, alongside spikes after terrorist attacks in Manchester and London.

But racism was on the rise in Britain long before the referendum — with the 62,518 hate crimes recorded in 2015-16 also a massive increase on the year before.

British Social Attitudes surveys have tracked a rise in people admitting to racial prejudice since 2001. The escalation in recent years is hardly surprising, given the David Cameron’s government’s enthusiastic smearing of Sadiq Khan during the London mayoral elections, Theresa May’s “Go Home or Face Arrest” vans and proposals from Home Secretary Amber Rudd that firms be obliged to publish lists of foreign employees.

Attitudes across Europe are worsening too.

They are stronger in Italy, where an unholy alliance with Silvio Berlusconi’s Forza Italia could see the Brothers of Italy and Forza Nuova parties enter government on pledges of deporting hundreds of thousands of migrants, and in Austria, where Freedom Party fascists sit in coalition government.

In Poland a giant march for a “white Europe” and a “Holocaust of Muslims” can be described as “a beautiful sight” by government ministers, in Hungary Prime Minister Viktor Orban can smear refugees from Western-fuelled violence in the Middle East as “a migrant invasion” which threatens to destroy a Europe that is “safe, fair, Christian and free,” and in Ukraine neonazi paramilitaries are unleashed on the government’s opponents and the authors of an ethnic cleansing operation that slaughtered hundreds of thousands of Jews and Poles in World War II are feted as national heroes.

This is in no way to diminish the gravity of racist violence in Britain. It takes lives.

But the reality that racists are on the march across Europe and beyond should warn us off liberal interpretations that blame the EU vote, which is after all unique to Britain, and seek deeper answers.

Fascists have always preyed on fear and insecurity, and an economy based on high levels of personal debt and the super-exploitation of workers paid poverty wages on zero-hours contracts gives them ample hunting ground.

This is why Jeremy Corbyn’s emphasis on empowering trade unions and ending the undercutting of wages by bosses importing cheap labour should form an essential part of the left’s strategy on combatting racism, while scaremongering claims from the National Farmers Union about fruit being left to rot in the fields because of a lack of immigrant fruit pickers are probably counterproductive — reinforcing stereotypes about foreigners doing jobs British people don’t want when the real issue is poor pay and conditions in British agriculture.

Action to address the gross inequalities that disfigure our society will disarm the racists who blame foreigners for problems caused by capitalism.

But direct action against racists and public solidarity among people of all cultures and faiths is equally important when those born abroad are under attack.

We should make One Day Without Us and the forthcoming Stand Up to Racism march planned for March 17 visible signs of that solidarity and warnings to the racists that their lies will not divide or weaken our movement.