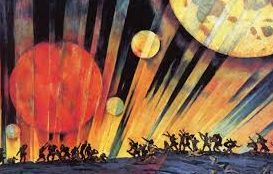 Russian Cosmism, co-published by e-flux and The MIT Press (2018).

Cosmism emerged in Russia before the October Revolution and developed through the 1920s and 1930s; like Marxism and the European avant-garde, two other movements that shared this intellectual moment, Russian Cosmism rejected the contemplative for the transformative, aiming to create not merely new art or philosophy but a new world. Cosmism went the furthest in its visions of transformation, calling for the end of death, the resuscitation of the dead, and free movement in cosmic space. This volume, edited by Boris Groys, collects crucial texts—many available in English for the first time—by the radical biopolitical utopianists of Russian Cosmism.

The late-nineneenth-century Russian philosopher Nikolai Fedorov believed that humans had an ethical obligation not only to care for the sick but to cure death using science and technology; outer space was the territory of both immortal life and infinite resources. After the revolution, a new generation pursued Fedorov’s vision. Cosmist ideas inspired visual artists, poets, filmmakers, theater directors, novelists (Tolstoy and Dostoevsky read Fedorov’s writings), architects, and composers, and influenced Soviet politics and technology. In the 1930s, Stalin quashed Cosmism, jailing or executing many members of the movement. Today, when the philosophical imagination has again become entangled with scientific and technological imagination, the works of the Russian Cosmists are newly alive and relevant. 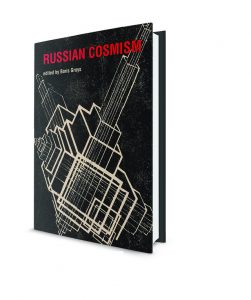 The art theorist Boris Groys, collects 13 extracts from Cosmist writings, mostly of the 1920s, and argues for their contemporary relevance to art (the contemporary museum) and politics (the ‘biopolitical’ power of the state, its ability to shape lives and landscapes). Consider for example the environmental futurism of Konstantin Tsiolkovsky, who in ‘The Future of Earth and Mankind’ imagines deserts and tropical regions put to agricultural use. A vast army of workers would traverse such territories, while above them a protective metal net was erected. This mesh would advance with the workers, and behind it new dwellings could be built . Such details capture the odd mix of airy whimsy and practical prescience at work in Cosmist thought.

For Groys, Cosmism wants to corral and protect life: fully achieved, it would mean ‘a radical museumification of life.’ In this sense, Russian Cosmism extends an argument Groys has been making for years, and notably in his 2008 book Art Power: that the contemporary museum may, surprisingly, be the most transformative place for art and artists today—a utopian space away from the art market, in which any and all experiments will be tolerated and will find a public.