National self-defence used to mean action by a country to defend itself against an attack launched by another state, but that definition no longer applies to the Middle East. 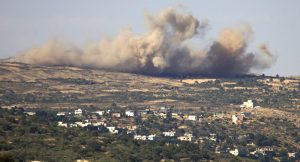 The Prime Minister’s office appears ignorant of geography since no missile landed within Israel’s borders. They were directed against Israeli bases on occupied Syrian land.

Israel claims, as it does with east Jerusalem, to have annexed Syria’s Golan Heights, but neither annexation is legal under international law, although this presents no problem to Donald Trump nor, it appears, the British government.

Tel Aviv explains that it has made clear to Damascus that it “will not allow” Syrian territory to be used by Iran’s Revolutionary Guards to train or arm Lebanese resistance group Hezbollah or various pro-Assad paramilitary groups considered a threat to Israel and its population.

Once again, Israel has no right under international law to tell a neighbouring state which forces it can approach to defend itself against concerted outside efforts to overthrow its government or, failing that, to occupy large swathes of its territory with a view to dismembering it.

Israel is linked not only to the US, Britain and France, which have launched illegal bombing raids against Syria — badged as directed against Islamic State (Isis) but in defiance of the government’s demand that its borders and population should be respected — but also Saudi Arabia and other Gulf sponsors of jihadism.

The Syrian government is understandably sceptical of claims by Nato members to be focused on defeating Isis when they applaud Israel’s attacks on military installations used not only by Iranian forces but also those of Syria and its ally Russia.

Add to this Israel’s habit of launching airborne missiles and firing artillery rounds from its bases in the occupied Golan against Syrian forces whenever they gain the upper hand against jihadist units operating freely under the eyes of the occupiers and an unpalatable picture takes shape.

It reveals a lawless state, armed to the teeth and supported by the world’s only military superpower, acting as a swaggering bully, occupying land where it chooses while constantly playing the victim by identifying its regional opponents as “today’s Hitler” intent on destroying Israel’s very existence.

The Israeli Air Force rocket barrage unleashed today against what it said were 70 military targets in Syria was in response to a number of missiles fired from a single rocket launcher that caused no casualties and minimum damage.

Defence Minister Avigdor Lieberman’s claim to have “hit almost all the Iranian infrastructure in Syria” and his warning that “they must remember that, if it rains here, it will pour there” echoes the might-is-right historical philosophy of countless tyrants.

His inference is that Israel’s military might is such that everyone in the region must do as they are told, accept Israeli expansionism and domination or face the consequences.

The danger is that those ordered to bow the knee will instead seek new means to retaliate, raising the threshold of horror and suffering to unimagined levels for all.

This article appeared in The Morning Star Thursday May 10th 2018.