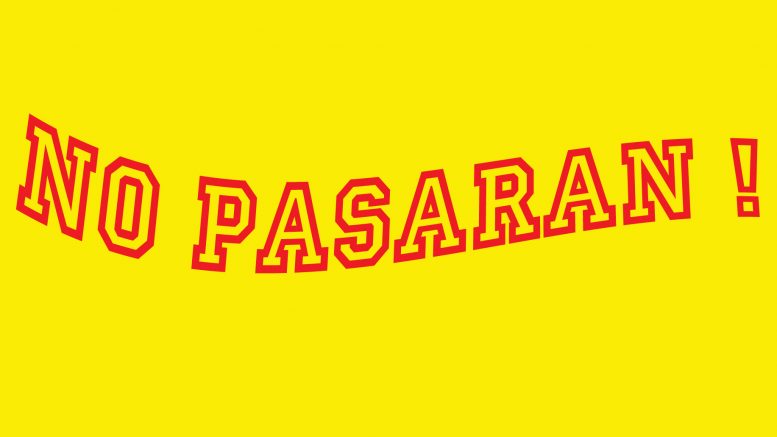 Railway workers have called for people to turn out in defence of their pickets on January 12 after far-right activists attacked striking train guards in Manchester.

RMT assistant general secretary Steve Hedley said yesterday it is “urgent” that members of the public stand by strikers after a group of thugs dressed up like French “yellow jacket” protesters marched on a picket line at Victoria station, central Manchester, yesterday.

The RMT strike, in defence of safety-critical train guard jobs, was scheduled on the same day that far-right organisers tried to launch a series of “yellow jacket” protests across the country, with a similar protest being held in London.

The group of approximately 50 protesters marched across several points in Manchester, stopping off to make speeches at the Central Library and Gregg’s bakery on Mosley Street.

They also chanted songs against Mayor of London Sadiq Khan and called for EDL founder Tommy Robinson to be freed from prison.

The group then walked through Manchester city centre towards Victoria Station, where members of the group attempted to disrupt the picket line of striking workers.

An RMT member of south-east Asian heritage was also singled out for abuse by the “yellow jackets,” who called him a “sex offender” and a “paedophile,” as well as shouting at him that “your lot get away with it” — an apparent reference to the recent grooming scandals in Rochdale and Rotherham.

Police intervened to stop any physical violence towards the railway workers, which led to the group being walked on through the station.

The Star has been told that Mike Whitby, a former BNP candidate for the Liverpool Mayoralty and convicted racist, was involved in the attack.

A picket who witnessed events told the Star under the condition of anonymity that “the pickets were all a bit shaken.

“I happened to be in the same pub as a number of [the thugs] after the event and overheard them saying that they were going to go back and ‘break some pickets’ noses’.”

Mr Hedley, who was assaulted last July by fascist activists in London, said that his union had previously warned that far-right elements were plotting to attack trade unions.

“We warned this would happen,” the picket said.

“Now we have to put our differences aside and defend all striking workers on the next picket lines this Saturday.”

Mr Hedley stressed the trade union movement must show a united opposition to the behaviour of the “yellow jackets,” adding: “It’s not OK to allow the far-right to dress in yellow coats and attend the same protests with them.

“There can be no unity with fascists even against a Tory government — they are not on our side, they are anti-working class.”

A key organiser of the far-right protest, known on social media as “Ashlea Robyn,” sent an ominous message to trade unionists from the movement, calling the RMT “morons” and telling Mr Hedley: “Don’t pick battles you can’t win.”

However, RMT activist and Manchester train driver George Waterhouse warned far-right activists: “This cowardly attack demonstrates exactly which side you are on.

“Manchester has a proud history of beating the fascists, and I’m sure the whole city stands with us.”

This article appeared in The Morning Star ( online ) on Sunday 6th January 2019.