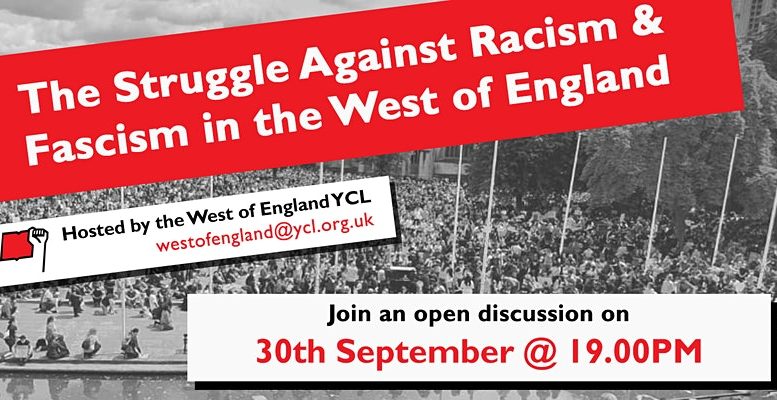 On Wednesday 30 September, YCL West of England hosted a public webinar on the struggle against racism and fascism.

Only 12 months ago, our branch wasn’t constituted, and only 6 months ago, the suggestion that we’d be holding a public discussion online would have been difficult to justify. The Covid-19 Crisis has thrown up new challenges for each and every one of us, but it is especially important that progressive and working class political organisations adapt to this new way of working; not just in spite of lockdown restrictions, but also because of the Covid Crisis itself.

Analysis by the Trades Union Congress in early August showed that the South West is one of the most severely effected regions by insecure work (second only to Wales), and confirmed that Black and minority ethnic workers are also disproportionately effected by employment insecurity.

When companies pursue a tactic of “fire and rehire” to cut pay and working conditions for insecure workers; when, as a result of this and a system of super exploitation, Black and minority ethnic workers are over 35% more likely to die from Covid than others; and when immigrant workers are scapegoated for the problems of British and international capitalism, as happens so often in the South West particularly; the need for class solidarity between all workers and Black and minority ethnic people has never been more necessary.

Whether that be through direct confrontation with the far right, like at the Battle of Cable Street, when anti-Fascists resisted Oswald Mosely’s Blackshirts – and we are fast approaching the battle’s 84th anniversary this October, or through a longer term process of identifying the day to day manifestations of racism occurring in our own communities, and engaging with the local people experiencing them, our branch are giving priority, in our programme of work, to the struggle against, and analysis of, racism, fascism and the far-right in the West of England.

We were joined by Ken Keable, editor of the book “London Recruits – The Secret War Against Apartheid”, former YCLer, and District Secretary of CPB South West England & Cornwall, as well as Joe Bastable, a present YCLer from North London! Their contributions were insightful and inspirational in equal measure, allowing all attendees of the meeting to participate fully in a free and lively discussion.

My branch would like to extend our thanks to all speakers and attendees for making the meeting a success, and now look forward to engaging fully in the struggle against racism, fascism and the far right in the West of England.

The Young Communist League’s General Secretary, Johnnie Hunter, has released a New Year’s address to mark the beginning of 2020.