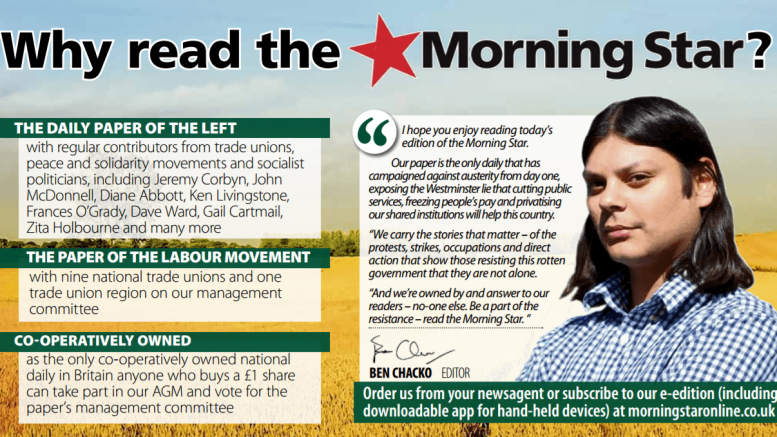 This will be a huge campaigning year for the Morning Star as we count down to May’s general election.

The Morning Star is 85. It was founded in 1930, in a country mired in the Great Depression that followed the Wall Street Crash, to act as the voice of working people resisting a ruling class determined to make them pay for its crisis.

The parallels with today are obvious, and the need for our paper — the voice of the organised labour movement, the only daily paper committed to peace and socialism — is more acute than ever as we approach the general election.

Austerity is not an accident. It is not, as it is sometimes portrayed even on the left, a daft economic policy aimed at reducing debt and fostering an economic recovery which happens to be counterproductive.

Austerity is a logical — and so far successful — strategy by Britain’s ruling class to increase its share of our country’s wealth by taking it away from working people.

In the process, the gains won by workers over the past century have to be reversed.

That means attacks on our pensions, our wages and our workplace rights, as well as on public services such as the NHS, locally accountable schools, free higher and further education and many more things which previous generations fought for in order that people could live, work and retire in dignity.

So austerity is logical. But that doesn’t mean it’s inevitable. Working people have fought and won before, which is why we have these services in the first place.

And every day workers are resisting the ruling-class onslaught, most effectively through their trade unions.

Only the Star reports these struggles. But we must reach more readers if that story is to be heard loud and clear — and May 2015 is to become the election the labour movement won.

We’re launching the 1,000 New Readers campaign to reverse the gradual decline in sales that has affected the Morning Star alongside the rest of print media.

We’re looking at everything. Meetings have begun with trade unions to discuss how we can co-operate to maximum effect — what they need from our paper and how we can reach the members who aren’t yet daily readers.

The support we’ve received has been phenomenal and humbling, with a wide range of excellent ideas coming in, including offering union members subsidised access to our e-edition and app, using the paper in union education programmes and ensuring members know that this is the newspaper that tells their story.

It’s not just unions we’re approaching — we’ll be meeting with activists for political parties including Labour, the Greens and the Communist Party to see how we can campaign most effectively for the left policies we need to turn this country around.

Our paper has a great relationship already with anti-austerity movement the People’s Assembly as well as a wide range of solidarity and progressive campaigning organisations, but we’ll be looking to improve our links and cross-promotion with all of them.

The Star is privileged to have the best and most committed readers of any newspaper, and many of them run readers and supporters groups up and down the country. We’ll be looking to help these groups grow, found new ost of this unique asset.

All this is combined with a proactive new approach to promoting our stories and those of our labour movement allies on social media, spreading the word far and wide to workers in struggle: we are your paper.

How will we measure success?

Last year we ran the Summer of Heroes fundraising campaign and were bowled over by the colossal £154,000+ you raised for the paper.

It’s easy to report on how much money comes in, but the 1,000 New Readers campaign will be trickier. Sales fluctuate day by day, week by week, town by town.

But we’ll be setting regional targets and analysing what strategies are paying dividends in each area.

Success would, obviously, mean a rise in sales by 1,000 a day on average, but we wouldn’t stop there. The daily paper of the left should be a mass circulation weapon in the hands of the labour movement.

We hope too that by revitalising our relationships with the trade unions, organisations and campaigns of the left we will give new life to the paper itself, improving the range and depth of our content and strengthening our campaigning punch.

Be the first to comment on "Morning Star – 1000 New Readers"