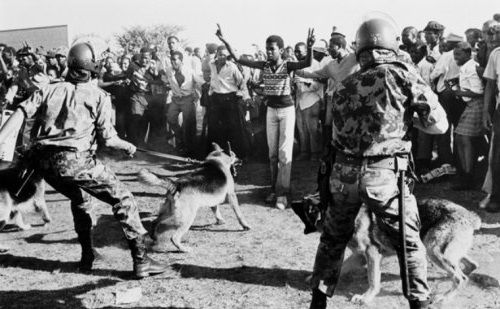 Our District Secretary, Ken Keable, wrote this article at the request of his old university and they have posted it on their “Alumni Blog”. His book  London Recruits – the secret war against apartheid is now being made into a film.

Graduating in 1968 with a Bachelor of Science degree in Electrical and Electronic Engineering, Ken Keable went on to become an activist in ‘the secret War against apartheid’. In his own words, Ken tells us his story.

Born in 1945 and leaving school in Walthamstow in 1963, I secured a student apprenticeship with the London Electricity Board (a fine, publicly owned organisation that offered good opportunities for working-class people). I was put on a four-year “sandwich course” (six months in industry alternating with six months at college) with the college part being at the Northampton College of Advanced Technology leading to a Diploma of Technology. However, while I was there the college was upgraded to a university and my diploma was upgraded to a BSc in electrical and electronic engineering. I paid no fees and I was paid a good wage – a fact that I love telling to young people I meet today, as it shows that things were not always as bad as they are now, and could be better again.

It being the 1960s, there was a lot of left-wing activity going on among students, but not, alas, at the new City University. Being a member of the Young Communist League (due to coming from a Communist family), I sometimes felt isolated and had many arguments with my fellow students. I remember the Students’ Union inviting a diplomat from the South African High Commission to explain apartheid to us. He said that white people had arrived in South Africa a few months before the black people came in from further north – he told us the precise dates – and claimed that this meant that South Africa belonged to the whites, implying that the black people were there on sufferance. This apparently justified the entire apartheid system. No-one challenged this argument. I was astonished by it but could not think of a suitable riposte.

In the autumn of 1967, I was a delegate to the London District Congress of the Young Communist League. There I was approached by the District Secretary, George Bridges, whom I had known for about seven years, and he asked me whether I would be willing to go on a visit to South Africa “to help our comrades”. I was deeply honoured at being asked. After sleeping on it, I said that I was taking my final exams in January and would be available after that. I met him again after the exams and he took me to meet a young white South African, Ronnie Kasrils (who was to become, in 1994, a minister in Nelson Mandela’s government). I had numerous meetings with Ronnie with the result that, in April 1968, I flew to Johannesburg with a false-bottomed suitcase containing 1,200 letters addressed to members of South Africa’s Indian community. Staying in a hotel for a few days, I bought 1,200 stamps, posted the letters and returned home. I had never flown before. I told no-one at all about what I had done. I found a way of locking the experience away in my mind so that it could never come out accidentally. It never did. I was proud of what I had done, and I still am.

After the Rivonia Trial, in which Mandela and most of the leadership of the African National Congress were jailed for life, the remaining members had to go into exile to avoid arrest and torture. Wondering how they were to carry on their liberation struggle, their leader, Oliver Tambo, hit upon the brilliant idea of recruiting white foreigners to enter the country and show that the ANC was not defeated. They chose London because there was so much human traffic from there to South Africa, and they wanted young people because they needed people with no dependents, as dependents would add to the problem if we were arrested. Ronnie Kasrils revealed a little of the story in his book “Armed and Dangerous – my undercover struggle against apartheid”, published in 1993, with a chapter called “London Recruits”.

My second and final mission to South Africa was in 1970. Together with my comrade Pete Smith, I went to Durban where we planted several “leaflet bombs” – entirely harmless devices, tested on Hampstead Heath, that blasted leaflets high into the air. We also set up a street broadcast, using an amplified cassette player. Only afterwards did we realise that similar things were done in five cities simultaneously. This brought hope to the oppressed people and signalled that the ANC was still alive and kicking. The most difficult moment came when, setting up the leaflet bombs in our hotel room in the middle of the night, I accidentally set one off, with a very loud ‘bang’. ANC leaflets were everywhere. Taking advantage of my white skin over that of the night manager, who was Indian, I succeeded in talking my way out of the situation and prevented him entering the room.

I kept all these activities secret, as did the other people involved. It became a deeply ingrained habit. In 2005, on reaching the age of 60, I began tracking down the other London Recruits, asking them to write their stories for a book that I edited. London Recruits – the secret War against apartheid was published in 2012 and is now being made into a documentary film, to be called London Recruits. All royalties go to the Nelson Mandela Children’s Fund.

From the information gathered in the book, we now know that the London Recruits did similar agitational work inside South Africa at least once a year every year from 1967 to 1973. Recruits also smuggled weapons, helped ANC fighters to enter South Africa and did reconnaissance and other work. Three – Sean Hosey, Alex Moumbaris and Marie-José Moumbaris – were arrested and tortured. Some were students (mostly from the LSE) but most were young workers. We did not liberate the South African people – they did that themselves, at great sacrifice – but we helped. We also struck a blow against racism worldwide and against those forces in British society that were profiting from the apartheid system and supporting it in deeds while opposing it in words.

I love telling the story to young people because international solidarity and anti-racism are so much needed today and I hope our story will inspire them to work for a better world.

Be the first to comment on "The Secret War Against Apartheid"