This month saw the 80th anniversary celebration of the Battle of Cable street and its decisive blow to fascism in the U.K. Comrades from our district made it to the East End for the rally, march and speakers, which saw Comrade Liz Payne ( CPB chair ) deliver a powerful speech on the historical and personal importance of the Battle of Cable Street. Also on the rostrum were Max Levitas who at the age of 101 is still not giving up the fight for justice, socialism, and peace; the Labour party leader Jeremy Corbyn, and the author and poet Michael Rosen amongst others. The poem below was read out by Mr Rosen and I think it is very important in these new times of refugees and the rise of the far right across Europe and the UK. Refugees are welcome! Solidarity! No Pasaran! 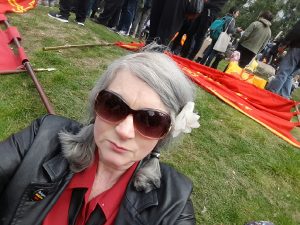 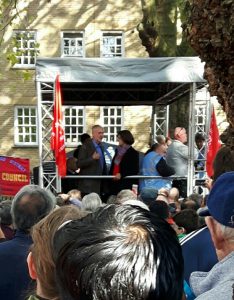 You Connie Ruby Isakofsky
From Globe Road in Bethnal Green
You Harold Rosen
From Nelson street, Whitechapel
You Connie with your mother and father
From Romania and Poland
You Harold with your family from Poland
You Connie
You Harold
your families working in the rag trade
Hats, caps, jackets and gowns
Hats, caps, jackets and gowns
You both saw Hitler on the Pathe News
You both saw Hitler Blaming the Jews
You both collected for Spain,
collecting for Spain
When Franco came
When round the tenements,
the whisper came
Mosley wants to march
Here, through the East End
So what should it be?
To Trafalgar Square to support Spain:
No pasaran?
Or to Gardiners Corner to support Whitechapel
They shall not pass.
Round the tenements
The whisper came
Fight here in Whitechapel
The whisper came:
Winning here
We  support
Spain there.
These are the streets where we live
These are the streets where we go to school
These are the streets where we work
They shall not pass.
You Connie
You Harold
Went to Gardiner’s Corner
You went to Cable Street
You piled chairs on the barricades
The mounted police charged you
A stranger took you indoors
To escape a beating
And thousands
Hundreds of thousands came here
Fighting Mosley
Supporting Spain
Thinking of Germany
And
Mosley did not pass.
You Connie
You Harold
Said, today the bombs on Guernica in Spain
Tomorrow the bombs on London here.
And you were bombed
the same planes, the same bombs
landing in the same streets
where you had said
they shall not pass
And the bodies
piled up across the world
Million after million after million after million
You Connie, your cousins in Poland
Taken to camps
Wiped out
You Harold, your uncles and aunts in France and Poland
Taken to camps
Wiped out.
But you Connie, my mother
You Harold, my father
You survived
You lived
We were born
We grew
You mother
You father
told us these things
I write these things
And today,
I tell you these things
We remember here together
Thanks to you
And we say:
They shall not pass.
http://michaelrosenblog.blogspot.co.uk/2013/10/mother-father-cable-street_4.html

Be the first to comment on "Cable Street 80th anniversary"