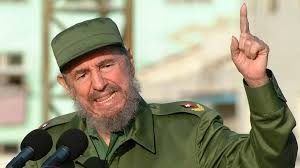 “A revolution is a struggle to the death between the future and the past.”
“They talk about the failure of socialism but where is the success of capitalism in Africa, Asia and Latin America?”

Fidel Castro,  who defied ten American presidents and placed Cuba onto the world stage, is dead at the age of 90.

The US government spent more than $1bn trying to kill, undermine or otherwise force Castro from power, but he endured unscathed before old age and disease finally took him.

His supporters in Havana described him as a tireless defender of the poor.

Castro was “a giant of the Third World”, said Agustin Diaz Cartaya, 85, who joined Castro in the 1953 attack in eastern Cuba that launched the revolution. “No one has done more for the Third World than Fidel Castro.”

“I’ll be 90 years old soon,” Castro said at an April 2016 communist party congress where he made his most extensive public appearance in years. “Soon I’ll be like all the others. The time will come for all of us, but the ideas of the Cuban Communists will remain as proof that on this planet, if one works with fervor and dignity, they can produce the material and cultural goods that human beings need and that need to be fought for without ever giving up.”

Be the first to comment on "Fidel Castro 1926-2016 ” I find capitalism repugnant. It is filthy, it is gross, it is alienating… because it causes war, hypocrisy and competition.”"