CAMPAIGNERS took to the streets of Dorchester on Thursday 8th December to urge people to have a say in consultations regarding NHS services which are under threat of massive reorganisation and cuts. 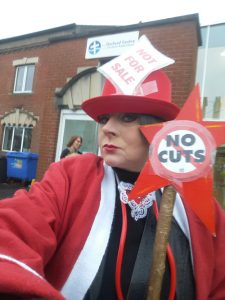 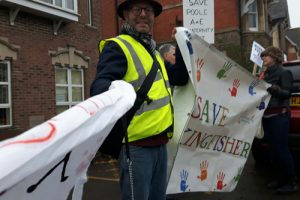 The demonstration was organised by Keep our NHS public, Dorset, and Dorset Socialists, of whom the CP Dorset branch is affiliated. Comrades from Dorset branch were responsible for the local press attention and forwarding contacts to the Dorset Echo who published the following:

Dr Jon Orrell, a GP at the Royal Crescent Surgery and a Weymouth and Portland councillor, ( Green Party )said the demo outside the CCG offices was one of a series of protests planned in the coming weeks while the CCG clinical services review is ongoing, and changes to GP surgeries are also being discussed.

He said protesters wanted people to be aware of the proposals and that they can have their say.

The proposals going out to consultation include a shake-up of acute hospital services in Dorset, which would see the Royal Bournemouth Hospital designated a major emergency care hospital and Poole Hospital a major planned hospital with an 24-hour urgent care centre.

Dorset County Hospital would be a planned and emergency care hospital, with the CCG claiming the services it provides would remain “broadly similar”.

No preferred option has been set out for the future of paediatric services and maternity services at Dorset County Hospital, with ongoing discussions taking place between the Dorchester hospital and Yeovil District Hospital regarding the possible integration of services.

The demo in Dorchester comes after campaigners branded the public consultation into controversial health shake-up in Dorset as ‘unclear’ and a ‘serious concern.’

Keep Our NHS Public ( keepournhspublic.com/ ) wrote a letter to Bournemouth and Poole Health and Wellbeing Board ahead of a meeting where members were due to discuss the Clinical Services Review which is part of the county’s Sustainability and Transformation Plan.

It reads: “The CCG proposals to close A&E services, maternity services, community hospitals and GP practices are of serious concern.

“However in addition to facing the threat of losing our vital NHS services we are further handicapped in challenging the CCG proposals because the CCG do not clearly and briefly spell out in any one document what their proposals actually are.

“Anyone completing it would have to have an exhaustive knowledge of current services across Dorset to understand the implications of the options the CCG are offering, or to be able to spell out in the blank ‘other options’ box what should happen instead.”

Tim Goodson Chief Officer NHS Dorset CCG invited Keep Our NHS Public to meet up and answer any questions they may have.

He said the public consultation which runs until February 28 has been quality assured by the Consultation Institute and has been the subject of ‘rigorous national assurance’ from NHS England.

He said: “The Clinical Services Review Consultation document – Improving Dorset’s healthcare – clearly and simply sets out our proposals and recommendations for how services in Dorset could change in the face of a number of challenges. These include increased demand, staff shortages and a significant funding gap of around £158m within the next few years. The document states what is and isn’t part of the review.

“The Sustainability and Transformation Plan (STP) and the Primary Care Commissioning Strategy and Plan are strategic documents; therefore there is no requirement to consult on them.”