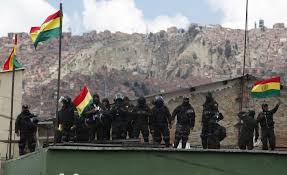 Signs that a coup is under way in Bolivia against newly re-elected President Evo Morales show that Latin America remains a desperate battleground between progress and reaction.

On a continent regarded by the US as its backyard since the 19th century, this takes the form of a struggle for independent states that can chart their own paths opposed by forces seeking to open their resources to exploitation by US corporations and subordinate their foreign policies to Washington.

On Bolivia, reports on the BBC and other British media have begun the process of selection and distortion that has characterised their coverage of Venezuela and other left-leaning Latin American states for years.

The pattern is familiar. Strategies have varied by country but when left governments aren’t rejected at the ballot box, other tactics come into play.

In Brazil we saw elected president Dilma Rousseff of the Workers Party removed from office in a constitutional coup and replaced by her deputy, Michel Temer, of a different party.

Despite being chosen by no-one, Temer had no hesitation in reversing the policies of the elected government, taking an axe to public services and declaring a 20-year spending freeze. Neither the US nor its European allies expressed any concerns over this.

Temer couldn’t stand for election. His ratings were dire and anyway he had a sleaze conviction that ruled him out.

So a conviction was found, he was barred from standing — and Amazon-burning, gay-bashing misogynist thug Jair Bolsonaro was able to enter office.

In Ecuador, Rafael Correa’s government was too popular to beat. So Lenin Moreno stood for the same party on the same platform with Correa’s blessing — before axing the social spending, purging the civil service and judiciary, driving his predecessor into exile and bringing back military subordination to the US.

In Venezuela and Nicaragua the opposition have ignored election results they don’t like. Venezuela’s impossible-to-cheat electoral system, praised by former US president Jimmy Carter as the best in the world, is no barrier to opposition parties claiming with no evidence that votes have been rigged or declining to participate in the first place.

These baseless assertions are then broadcast to the world by the West’s handy media monopolies, and when right-wing militants take to the streets, burning government supporters to death, announcing military coups and lobbing petrol bombs at the police, we watch reports of “mass protests for democracy being suppressed by a wicked tyranny.”

This appears to be the approach of Bolivia’s opposition, whose main leader Carlos Mesa served in the Sanchez de Lozada government that killed over 60 protesters against inequality in 2003.

Even the US-dominated Organisation of American States cannot pretend that Morales did not come first last month, so it claims his recorded 10-point lead, necessary to avoid a second round, is suspect.

This is based on his vote rising sharply towards the end of the count — though anyone familiar with Bolivia’s electoral geography knows that the votes come in last from the rural indigenous areas that have always been the strongest supporters of Morales, South America’s first indigenous national president.

Bolivia under Morales has lifted millions out of poverty. Its Mother Earth law, drawing on indigenous traditions, is no hippy fantasy but a practical policy promoting sustainable use of natural resources and legal bars on the pollution of the air and water that millions in this country will want to learn from.

But this leader, who rode to power on the movement demanding Bolivia’s hydrocarbon resources be taken over for the public good rather than exploited by foreign companies, is a thorn in the side of the US.

That is why a coup against him is under way. The left internationally must stand with Morales and Bolivia’s Movement Towards Socialism.

This article appeared in the Morning Star, Monday 11th November 2019.