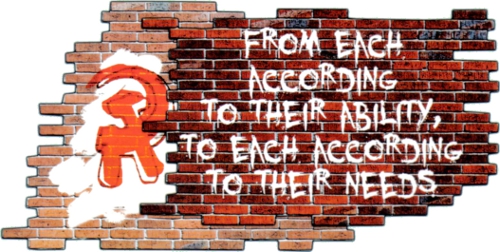 In the Manifesto of the Communist Party, Marx and Engels set out key principles in the establishment of a communist society.

When we read through that list, there is very little that is scary about communism. It is quite surprising how much we have already achieved! We have a graduated income tax; during the financial crisis several banks were bought under state ownership; until the 1980s the state owned communication and transport networks (not to mention gas, electric and water); we have free education for all children. Marx even foresaw the importance of the environment by calling for the improvement of the soil. In Britain we could add another point – we have created a National Health Service.

The Manifesto of the Communist Party was written over 150 years ago. The principles of the manifesto are still relevant today and its theory is alive in the work communist and Marxist parties around the world. The Communist Party of Britain sets out its programme in the document Britain’s Road to Socialism.

But what do communists mean by private property and inheritance?

A communist society does NOT stop people from having things. Communists define property and ownership as the ownership of the means of production and the ownership of capital. If we go back to the Manifesto, Marx and Engels spell it out:

“We Communists have been reproached with the desire of abolishing the right of personally acquiring property as the fruit of a man’s own labour, which property is alleged to be the groundwork of all personal freedom, activity and independence.

“Hard-won, self-acquired, self-earned property! Do you mean the property of petty artisan and of the small peasant, a form of property that preceded the bourgeois form? There is no need to abolish that; the development of industry has to a great extent already destroyed it, and is still destroying it daily.

“Or do you mean the modern bourgeois private property? But does wage-labour create any property for the labourer? Not a bit. It creates capital, i.e., that kind of property which exploits wage-labour, and which cannot increase except upon condition of begetting a new supply of wage-labour for fresh exploitation. Property, in its present form, is based on the antagonism of capital and wage labour.”

“You are horrified at our intending to do away with private property. But in your existing society, private property is already done away with for nine-tenths of the population; its existence for the few is solely due to its non-existence in the hands of those nine-tenths. You reproach us, therefore, with intending to do away with a form of property, the necessary condition for whose existence is the non-existence of any property for the immense majority of society.

“In one word, you reproach us with intending to do away with your property. Precisely so; that is just what we intend.””/p>

In Britain today, figures from as recent as 2008 show that half of the population of Britain own just 9% of the country’s wealth. (http://www.ons.gov.uk/ons/rel/was/wealth-in-great-britain/main-results-from-the-wealth-and-assets-survey-2006-2008/index.html)

Wealth, both in property and capital, is overwhelmingly concentrated in the hands of an elite minority. Britain’s monopoly capitalists and their corporations invest and operate on a global scale only matched by those in the USA. Not only do Britain’s capitalists generate profits overseas, but in the UK foreign capital now owns large parts of our transport, energy, media and financial sectors. It is this property that communists seek to bring back into public ownership.

Next: Britain’s Road to Socialism