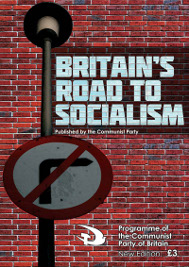 The programme of the Communist Party is set out in the document Britain’s Road to Socialism.

In this programme, the Communist Party explains its view that:

This programme is based on the study, analysis and assessment of concrete realities, tendencies and trends. It is intended to be a guide to action, not a speculative prediction or a dogmatic blueprint. It is a living, developing programme to be constantly tested in practice and reassessed in the light of experience.

You can read Britain’s Road to Socialism in full.

Next: An Alternative Economic and Political Strategy