There is no need for any cuts to public spending; no need to decimate public services; no need for unemployment or pay and pension cuts; no need for Austerity and privatisation. There is an alternative.

We need a government to reverse damaging austerity, and replace it with a new set of policies providing us with a fair, sustainable and secure future. We can no longer tolerate politicians looking out for themselves and for the rich and powerful. Our political representatives must start governing in the interests of the majority.

1. A fairer economy for a fairer Britain

3. High standard homes for all

5. For fairness and justice

6. For a secure and sustainable future 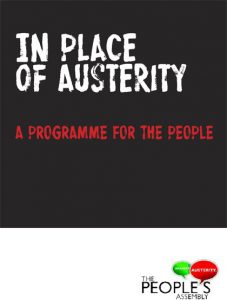