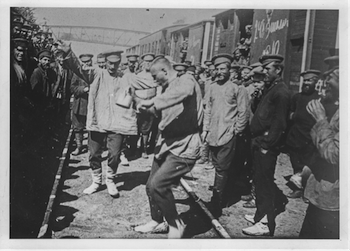 This week marks a very special centenary within our celebrations marking the events of the great October socialist revolution in Russia in 1917, one which is of crucial significance in respect of our struggles against the devastation brought about by imperialism and its catastrophic interventions and wars in our own time

On November 8 1917, the day following the establishment of the workers’ and peasants’ government, the second All-Russia Congress of Soviets of Workers’ and Soldiers’ Deputies in Petrograd, which now had state power, issued its “Decree on Peace.”

So fundamental was the ending of the inter-imperialist first world war to the future of the peoples of Russia and the peoples of all belligerent countries that it was articulated as a first priority of the first workers’ state in the first 24 hours of its existence.

The issuing of the decree was supremely revolutionary and the initial act of internationalism of the workers’ government.

For the first time in the history of the world, the will of workers, soldiers and peasants with state power in their hands was being expressed in respect of the resolution of conflict and the rights of peoples.

By means of the decree, the true character of imperialist war and the nature of peace as defined by the working class were plainly set out, thus demonstrating the inherent link between the struggle for peace and that for socialism.

The stark contrast between the approach of the new government and that of the preceding “government of landowners and capitalists” could not have been greater. It was at a stroke put before not only the ruling classes of the warring countries but all the people too.

The decree described continuation of the imperialist war, motivated by the issue of division of conquered territories between the richest and most powerful countries, as “the greatest of crimes against humanity.”

The people in the warring countries involved were exhausted, tormented and wracked with suffering. The call was for an immediate, just and democratic peace.

What this meant was simply and unequivocally stated. There were to be no annexations and no indemnities. Peace terms were to be equally just for all nationalities without exception.

All troops of the aggressor armies were to leave occupied territories. Only after this had taken place could the people of those nations determine the future of their states by a free vote “without the least pressure being brought to bear.”

The decree declared the abolition of secret diplomacy and the government’s intention to reveal the contents of all secret treaties.

It was emphatic that the workers’ government would not be bound by anything they contained that was to the benefit of Russian landowners and capitalists or pertained to the retention or expansion of the annexations of the Russian empire. From now on, all negotiations would be carried out openly and transparently for all to see.

True to its word, only two days later, on November 10, the government began publishing in the press (Pravda and Isvestia) the secret treaties of the Tsar’s dictatorship and the provisional government and by February 1918 seven volumes of such had been collected and exposed, including those which demonstrated Britain’s complicity with tsarist Russia and its own aggressive war aims.

The appeal for peace would be to the governments and peoples of all warring countries. It recognised that the governments concerned could not be ignored if peace was to be rapidly concluded.

However, universally, the peoples’ interests were different from those of their governments and for the new workers’ and peasants’ government in Russia, it was imperative to “help the peoples to intervene in questions of war and peace.”

The decree made a special appeal to the working class of the three leading imperialist countries participating in the war — Britain, France and Germany.

It noted that the workers of these countries had made “the greatest contributions to the cause of progress and socialism” — including the Chartist movement, historically significant revolutions and the creation of mass working-class organisations respectively. Now they had a duty to save humanity from the horrors of war and its consequences.

This mass action would be an essential contribution to the conclusion of the peace. It would also support the workers’ state in Russia in the freeing of its working people “from all forms of slavery and all forms of exploitation.”

Looking back over the century that has followed the issue of the decree, it is clear that the principles of workers’ diplomacy and international relations enshrined within it and the development of these principles in practice over the decades by the peace-loving peoples of the world have exposed and challenged the forces of imperialism, now led by the US and its Nato and EU allies, for what they are — the primary source of conflict, war and human suffering across the globe.

War and conflict are inherent in global capitalism’s quest for profits and these have become all the more terrible in the wake of the irresolvable and ongoing economic crisis, threatening regional conflagration and potentially world war on a scale hitherto unknown.

We should be clear on this — there is no peaceful means of snatching the resources of the world; exploiting the labour of billions; creating, expanding and monopolising markets, seeing off competitors and, above all, ensuring that all advances on the road to socialism anywhere in the world are thwarted and crushed.

At the same time, we who know that another world is possible, must say no to war, no to Nato and yes to peace and socialism.

It is only together in solidarity with the peace-loving peoples of the world in true internationalist struggle that we will secure a peaceful, just and democratic future.

But in this, as the Decree on Peace in 1917 made plain, we as the working class of a leading imperialist power have the special primary responsibility of taking on, challenging and ultimately defeating our own ruling class — for the sake not only of the people of Britain but for the enslaved, exploited and war-torn people everywhere.

• Liz Payne is the convener of the British Peace Assembly, the only affiliate from Britain to the World Peace Council.

Be the first to comment on "Issued a day after the Revolution, the Decree on Peace was a supremely revolutionary act of internationalism"