Comrade Ted Poole passed away on 6th March 2018 at the age of 92. For many
years he was Chair of the Swindon branch and his influence in the town and beyond
is largely understated. The respect he gained was well demonstrated by over 100
people attending his funeral and more turning up to celebrate his life at the wake.
What follows is the given eulogy with the addition of some parts which were
omitted at the funeral due to the constraints of time.

It is my great privilege to speak here today about Ted, on behalf of Swindon
Communists.
Ted Poole joined the Communist Party, with his wife Ivy, in 1956. He often
remarked that Ivy and he joined the CP whilst a lot of others were going the other
way! Many in Swindon’s labour movement and beyond were to benefit from the
decision they took at that time.
Ted was proud of his CP membership. He was a staunch, loyal and disciplined
member of the Party. Well respected, popular and always, always hard-working he
carried with him a strong sense of duty equalled by few. I believe it is there that we
find Ted’s core.
Central to everything that Ted did and thought arose from his humanity. That was
the essence of the man; his very core.
◆ It was Ted’s humanity which led him to question so much that he experienced and
that he saw around him;
⁃ To question, the conditions of working people, the low wages, the poverty, the lack of
safe working conditions;
⁃ at the height of the Cold War to question the widely peddled opinion that the Soviet
Union was our new enemy – a country that been our ally in the fight against fascism
in Europe.
⁃ to question the racism gathering pace with each wave of immigration into this
country whilst politicians such as Powell fanned the flames of xenophobia and which
for Ted and others like him, this meant the need to be constantly vigilant;
⁃ He questioned the role of Britain as an imperial power. As an Internationalist, Ted
saw no place for British colonialism and its oppressive practices. So he gave his full
support to those struggling for independence.
⁃ He questioned the way women were treated within our society. He was steadfast in
his support for equality.

Above all, Ted’s humanity led him to understand that the most important cause was
the cause for Peace. He would point out in clear terms, that it was never the
politicians, those that made the decision to go to war, who put their lives on the line.
For him, to fight for Peace was the only principled position to take. His humanity
demanded it.
On joining the Swindon Communist Party and finding himself in the company of
comrades such as Ike Gradwell, Bill Sargeant, Edith Stevens and Dickie Pearce,
giants of the Labour Movement in this town and with wide influences, Ted found the
vehicle upon which he could drive his thoughts and ideas further forward. Ted was
no high-minded academic poring over the Marxist phrases so beloved of those who
would intellectualise to the point of paralysis. Ted could see where his humanity and
the party of Marx ran the same course. His activism was always focussed on doing
something. I couldn’t even guess at how many London demonstrations he and Ivy
attended. He was an ardent advocate and supporter of the Morning Star. For over 40
years he did the “Star round” on a Saturday, with Ivy, delivering our paper to people
who, by and large, had been the recipients of Ted’s political understanding and
ability to explain clearly the issues that caused concern.
I often thought that Ivy and Ted must have had little time to themselves.
Particularly in the evenings. Ted did not waste his breath or his energy.
 Some of the organisations he was involved in, often taking office.
• The Communist Party
• Chair, Swindon Branch
• District Committee member
• District Congress delegate
• National Congress delegate
• The Campaign for Nuclear Disarmament
• His trade union: the AUEW which then merged into Unite
• Thamesdown Racial Equality Council
• The Anti-Apartheid Movement
• Swindon Trades Council
• Chair
• People’s Press Printing Society
• Swindon Miners’ Support Group
Ted’s contributions to these organisations were respected and reflected. He
personally built a lot of support for the labour movement in Swindon.
It goes without saying, that whenever Ted turned up to any meeting he attended, he
always had a couple of copies of the Morning Star to distribute.
Ted’s committment to the welfare and rights of ordinary people was international
and diverse in it’s scope. For Ted, it mattered not from where someone originated, or
where they lived, or the colour of their skin, their religion, their disability, their

sexuality. Ted’s humanity, embraced by his political committment, gave him the tools
he needed to make a difference. …. And make a difference he did.
Ted used his Marxism to understand that class division is fundamental to our
cultural influences. He saw, at a time when the entertainment industry was
embarking on what was to become a massive explosion of commercialisation that
the voices of ordinary folk were going to be overwhelmed. Not for Ted the tinned
syrup dished up by media barons and entertainment moguls. Ted knew how
important was that which he would refer to from time to time as, “Our culture”. He
meant the songs, the dances, the poems, the monologues, the music and the arts of
ordinary folk. Folk from all over the world. For Ted, a love song from Lancashire, a
song of protest from Chile and an African-American spiritual all had the same
mother….
And so to a major legacy of Ted’s, and still with Ivy, the Swindon Folksingers
Club about which we have already heard and I’m sure, will hear a lot more from
others better placed than I.
He will be sorely missed and we salute you, comrade.

At the end of the eulogy, The Internationale was sung. This anthem meant a lot to
Ted; clearly recognised by those in attendance as most joined in the singing. The
recording used was by Arthur Johnstone, the Scottish folksinger.

In Loving Memory
of
EDWARD 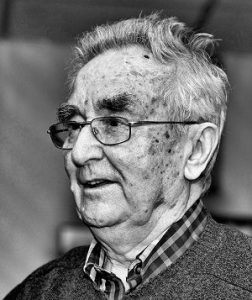