Contribution from John Foster, international secretary of the Communist Party to the discussions of the GUE/NGL group in the European Parliament in Lisbon Friday 27 April.

The Communist Party of Britain thanks the host party, the Portuguese Communist Party, for organising this important meeting on the future of Europe.  It provides a major opportunity for developing unity on the Left and enabling our party to explain how we understand the current opportunities in Britain.

The position of the CPB is, first, that the Left in Europe is at a potentially historic turning point in the battle against the EU of the transnationals.  Second, that our collective ability to seize that initiative and to make a qualitative change will depend on the level of cooperation between the parties of the Left across Europe over the next few months.  This is why this meeting is so timely.

This is a strong statement.  What is its basis ?   There are three factors

1.  The Labour Party in Britain has, for the first time ever a Left leadership and is working very closely with the Left in the trade union and working class movement.   It is now a mass party with 600,000 members and its Left leadership is not likely to be toppled in the immediate future

2.  The Labour Party has a realistic potential to win the next general election and form a government.  It has been ahead in opinion polls over most of the past year.

3.  The Labour Party’s economic programme challenges monopoly power in Britain – not at this stage explicitly but effectively given the structural weakness of British monopoly capital.

If there was an election next month, and there could be, this is the programme that would be put to the electorate.  It could win.

This is why we argue that Britain is currently a weak link in the imperialist chain, not necessarily the weakest, but weak nonetheless.  And the political consequences of such a Labour victory would significantly strengthen anti-monopoly forces elsewhere in Europe.

This prospect is the real political context for the current negotiations between the EU and the British government.

The objective of the EU negotiators, on behalf of EU corporate capital including British capital, is to halt this process, to precipitate a political crisis in Britain, and either force a rerun of the referendum or secure a parliamentary majority in favour of Single Market membership.  The intention is to lock Britain, and any future Labour government, back into the EU’s neo-liberal structures.

In taking this position the EU negotiators do so in alliance with corporate capital in Britain.

One of their key weapons is to exploit confusion on the Centre Left of EU politics and to promote the belief, in the EU and in Britain, that the movement to leave the EU is entirely driven by chauvinist, anti-immigrant and racist opinion, that ‘liberal’ values are at risk and that in Britain there is no viable Left alternative.

This is why the role of the Left and Communists elsewhere in Europe is so important for us in Britain.

You have the ability to expose the truth about the EU based on the real experience of the working class:

On our side in Britain there is a significant prospect that a Labour government, backed by the trade unions and a mass movement, could challenge monopoly power and hence by example help transform expectations of what is possible elsewhere in Europe.

In order to understand why two aspects of the current situation need to be explained.

First, why monopoly capital in Britain is a potential weak link – economically and politically

The strength of British monopoly capital over thirty years has rested on the development of the City of London.  London is today the global centre for currency and commodity speculation and corporate mergers and acquisitions.  However, the bulk of capital involved is not from Britain but from banks in the United States, Japan and Switzerland.  These banks are able to operate through London by virtue of it being within the boundaries of the EU and they currently control up to two-thirds of all EU financial services.

British investment companies have profited greatly from this arrangement through access to cheap money – generating massive super-profits through leveraged trading.  At the same time this process has sucked investment out of the rest of the economy resulting in massive de-industrialisation.

Today this arrangement is under threat from two directions.  EU regulations are threatening unregulated and leveraged speculation while EU banks seek to regain control over financial services.  Then, from the United States, a far more aggressive stance is emerging over its trade deficit with the EU.  The City of London sits in the middle – effectively on a fault line of inter-imperialist rivalry.

At the same time, an increasing proportion of the investment cash reaching London comes from outside the EU, from the Middle East and Asia.  So while most corporate capital in Britain wants the old EU arrangements to continue, a segment sees greater opportunities for unregulated trading outside the EU and closer links with the US.

British finance capital is therefore split.  It is this structural conflict within finance capital that is one key source of the divisions within Britain’s Conservative Party.

But the divisions also have a political base – in terms of the ability of the Conservative Party to sustain sufficient electoral support to govern.   In the 2014 EU elections and the 2015 general election the Conservatives lost up to a third of their vote to the anti-EU UKIP.  This was partly on immigration and partly on issues of sovereignty and de-industrialisation.

This takes us to the transformation of the Labour Party.

In the past the Labour Party acted as the second party of government for British finance capital.  It does so no longer.

Lenin always stressed the difference between Britain’s Labour Party and most European social democratic parties.  This difference was that the British Labour Party had itself been founded by the trade union movement, a movement in Britain with a single united centre, remained organically based within it and hence could potentially reflect the changing balance between Left and Right.  In 2016 it was initially trade union votes that gave the Labour leadership to Jeremy Corbyn – reflecting the anger that existed within the working class at ten years of wages cuts, anti-TU Laws and the dismantling of the welfare state.  The same anger, especially among the young, then led to the trebling of Labour Party membership and a surge in the electoral fortunes of the party in 2017.

Every attempt has been made to overthrow the new leadership from inside the party. This now seems to have failed and the Left has consolidated its grip on the National Executive and within the party secretariat.   At least temporarily therefore British finance capital has lost control of its second party of government – at a time when its first party of government, the Conservatives, are increasingly divided and disabled.

It is for this reason that over the past three months enormous pressures have been placed on the Labour leadership through the parliamentary party and right-wing elements in the trade union movement to endorse membership of the EU Single Market or, what amounts to the same thing, the EU Customs Union.

Again the Left has so far been able to turn the tables on the Right.

In his Coventry speech in February Corbyn set out his arguments for ‘A’ Customs Union: not The EU Customs Union or The EU Single Market.  And, crucially important, he explained this on Left terms.

In this way EU neo-liberalism was directly challenged – ideologically, where it is most vulnerable as the tool of finance capital against working people.

However, the pressures remain immense in parliament, the mass media and in every forum that responds either to the EU or to British corporate capital.

It is here that the intervention of the Left from within the EU has a potentially critical role.

The dominant pro-EU media portray the movement against the EU as racist, chauvinist and anti-international and do so with particular effect among youth and students and among professionals.

They are able to do so credibly because up to a third of the anti-EU vote was of this character and because the right-wing of the Conservative Party, including those in government, continue to use this rhetoric.

But they have to conceal the fact that two-thirds of the vote against the EU was not of this character, that half Green voters voted against EU membership and a third of Labour voters, that overall the vote to leave the EU was a vote of the poor and dispossessed against de-industrialisation and economic exclusion.

They also suppress the actual character of the EU as a generator of the conditions for racism inside the EU and the EU’s real international role as an imperialist bloc, its interlock with NATO and its disastrous economic impact on vulnerable economies outside the EU.

This is why the intervention of the Left in the EU is so important.   In Britain the Left needs to win these arguments in order to consolidate its position inside the Labour Party – and, even more important, to build and consolidate an informed, intelligent mass movement for change.  For without this a Labour government can achieve little against the power of the capitalist state – even if finance capital is divided and ‘unable to rule in the old way’.

In concluding, I should explain that I have said nothing about the North of Ireland and this is based on our party’s long-standing position as a party.  We do not recognise the state in the north.

Hence any future relationship has to be defined by the people of the island of Ireland – not by the workers’ movement of the imperialist country.  At the same time we, in Britain, do appeal for solidarity and assistance in our own struggle to develop popular sovereignty against the power of finance capital in Britain – and that we believe this is best secured in current circumstances by Britain not being in the EU or its Single Market.

We also believe that this position strengthens that of all those campaigning across the EU to stop the EU’s neo-liberal aggression against the public sector, trade union rights and more fundamentally against popular sovereignty and socialist change. 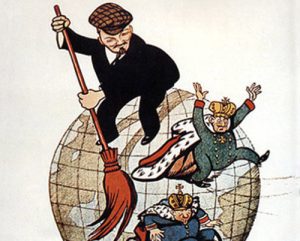