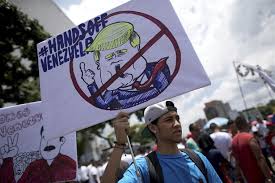 The Executive Committee of the Young Communist League has released the following statement on developments in Venezuela.

The Young Communist League of Britain expresses its complete support for and solidarity with the Venezuelan People, the Bolivarian Republic and President Maduro. We condemn categorically and in the strongest possible terms the unconstitutional and anti-democratic actions of the opposition and the United States which funds and controls them.

President Maduro was democratically elected by the People of Venezuela. This is a fact. There is no precedent in the Venezuelan constitution or in international law for the actions of Juan Guaido in unilaterally declaring himself President of Venezuela. The immediate recognition of this declaration by the US and its allies tells us who really coordinated this attack on democracy and who really controls Guaido and the so called opposition.

It clearly demonstrates the contempt with which imperialism views the will of the people, democracy and national sovereignty. To put this affront in perspective, it is the equivalent of John Bercow, Speaker of the House of Commons, declaring himself ‘Interim Prime Minister’ in light of the chaos over the Brexit negotiations and then being recognised by various countries. The people of Britain would not stand for it. The people of Venezuela will not stand for it. The people of the World cannot sit idle.

We condemn the European Union and the governments which have joined the US in their attack on Venezuela. We call on the British Government to demand respect for democratic and international norms and to recognise the legitimate government of Venezuela.

This move is just the latest attack in the campaign by the United States and its regional puppets to smash democracy in Venezuela. The previous coup attempts and the current economic war attempting to strangle Venezuela were all planned and financed in Washington before being carried out by hired hands across Latin America. The United States refuses to tolerate a socialist government in what they believe to be “their own backyard”.

We express our solidarity with the comrades of our sister youth organisations, the Communist Youth of Venezuela and the Youth of the United Socialist Party of Venezuela, who are at the forefront of defending democracy there.

Events in Venezuela must be a warning to the peoples of the World. Imperialism refuses to accept democracy and national sovereignty because this conflicts with the interest of big business and finance capital. It will set a truly dangerous precedent if we are prepared to accept figurehead puppets, imposed by Donald Trump, whose only claim to legitimacy is their own declaration. This cannot be allowed in Venezuela, or in any country.

No to US intervention! No to Trump! No to Guaido!

South West workers have lost out more than most.