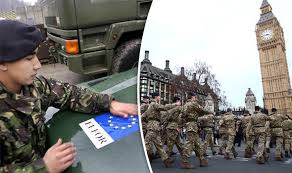 Below are the two most recent CP statements regarding Brexit.

Only a full Brexit will create the conditions for the rapid regeneration and renewal of industry, infrastructure and public services, the Communist Party insisted at the weekend.

Alex Gordon reminded the party’s executive committee of Jeremy Corbyn’s speech in Coventry in February last year, when the Labour leader had warned that EU treaties and directives would block his party’s policies to provide state aid to cutting-edge industry, extend public ownership, outlaw the super-exploitation of imported agency labour, reform public sector procurement rules and put an end to outsourcing and privatisation.

Mr Gordon pointed out that EU membership and Thatcherite economic policies together had transformed Britain’s economy from one with a large industrial sector in a trading surplus with the rest of Europe into a casino economy dominated by City institutions and transnational corporations, dependent upon incoming investment and British imperialism’s earnings from financial services, property and cheap labour and raw materials around the world.

‘Today, without an economic Brexit from EU single market and customs union rules, a future Labour government would face major obstacles in its efforts to implement left and progressive policies – which is one reason why the City, big business organisations and many right-wing Labour MPs are so desperate to prevent an economic Brexit, even if they cannot delay or prevent a formal, political Brexit’, the former RMT union president declared.

He insisted that a General Election with a Labour victory was the best way out of the current constitutional and political crisis of the British ruling class.

Meeting on the eve of what may be a decisive week for Britain’s future relations with the EU, the CP leadership reiterated its ‘uncompromising opposition’ to any further postponement of Brexit Day and to any second referendum designed to keep Britain in the EU instead of honouring the people’s decision in June 2016.

Britain’s Communists also decided to call for a ‘people’s boycott’ of any British involvement in June’s elections to the ‘EU Commission’s fake parliament’ in Brussels.

Monday ( 1st April ) evening’s votes in the House of Commons confirm that a substantial number of MPs remain determined to bind Britain as closely as possible to the EU and its rules and institutions if they cannot stop Brexit altogether.

These MPs show utter contempt for the EU referendum result – the biggest democratic vote in our history – and make a mockery of their past pledges to ‘honour’ the decision made by a clear majority of voters.

A majority of MPs have no genuine disagreement with the Prime Minister’s Withdrawal Agreement which ties Britain to the EU Single Market in most goods, keeps us permanently aligned with the EU Customs Union through the unnecessary Irish ‘backstop’, maintains EU Court of Justice sovereignty in large areas of economic and social policy and pledges to pay the EU at least £39bn in a bogus divorce settlement.

However, a substantial number of these are also holding out in the hope of locking Britain permanently into a customs union or overthrowing Brexit altogether in a second referendum that would exclude a real exit from the ballot paper.

Tragically, many of these would-be saboteurs are Labour MPs who put their loyalty to the EU above any loyalty to democracy, popular sovereignty and the Labour Party.

Many are opposed to the leadership of Jeremy Corbyn and have no concern that by painting Labour as an anti-Brexit party they are jeopardising the prospects of a left-led Labour government. Some openly support the possibility of an all-party ‘national government’.

The priority now must be to allow Britain to exit the EU on April 12 on World Trade Organisation terms and secure an early General Election and a Labour victory.

That government would then be free to carry out Labour’s left and progressive policies, which include aid for manufacturing industry and mutually beneficial trade agreements with European and developing countries.