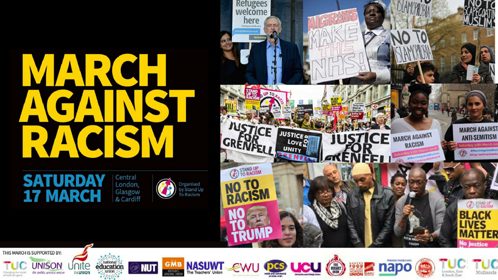 The cowardly defacement of the assembly point for todays anti-racism demonstration in Cardiff should strengthen the resolve of all marching.

It is vital that we assemble in towns and cities across our country to show that we will not flinch in the face of racism and fascism, that we will stand steadfast beside those on the receiving end of discrimination, slurs and violence.

Those with their hands on the levers of power like to think that Britain was made “great” by its imperial conquests, its bloody sacking of a good chunk of the planet, and proceed with similar ideals if somewhat moderated methods.

We know that Britain is made great by the efforts of its people, who toil together and try to ensure a better future for their children, no matter where their ancestors might have hailed from.

The actions of a small, scattered mob of far-right hatemongers would be ludicrous were it not for the clear memories of what such actions, left unchecked, can lead to.

The memories are there in the swastikas they scrawled in Cardiff. The symbol of the Hitler regime that methodically murdered millions of Jews, Slavs, Roma, gay and disabled people, and whomever else the nazis found distasteful — along with the brave women and men across Europe who had the courage to stand with them and fight the nazi menace.

And we must be honest with ourselves — the threat is not only from tiny far-right grouplets.

At the head of our government, in Theresa May, we have someone who has constructed a “hostile environment” for refugees and immigrants.

Who wants doctors to check sick people’s passports before treating them.

Her MPs are not much better. The Tories have openly stolen the clothes of parties usually considered further to the right.

Britain is not alone in this. We’ve seen similar in Italy, where the largest party in what the Italian media ludicrously calls the “centre-right” coalition has explicitly threatened to round up and deport 500,000 “foreigners.”

We see it in Germany now, where liberals celebrate the renewed “grand coalition” while its interior minister says that “Islam does not belong” in Germany, a statement that will only fuel support for the far-right AfD.

And, back to Britain, in the current frenzied Russophobia two national publications literally resurrect nazi propaganda posters to portray Vladimir Putin as the face of “Judeo-Bolshevism,” as the nazis would have it.

It is essential that we march today, and that we continue to march, and that we show that racism has no place in our country.

But it is not sufficient to constrain ourselves to the battle over racism. After all, it is a tool used by the capitalist class to divide us.

And it is essential to them that we are divided, as they bang the war drums, ruin our children’s education, smash our treasured health service, and allow more people to burn to death in their homes.

Refugees and immigrants are not the source of our country’s problems, and they never have been. It is the gilded elite, who want all and more for themselves, and want it on the backs of the working class, that are to blame.

This article appeared in The Morning Star, Friday 16th March 2018.