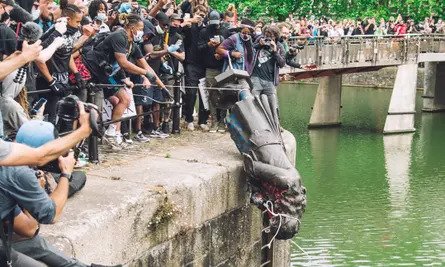 Bristol’s Communists welcome the dumping of Edward Colston’s statue into the harbour. It is a fitting end for a man who made his fortune from stealing and selling human beings, using race to justify his actions.

The Black Lives Matter demonstrations in Britain have grown as people have seen that both police treatment of black people, and the high death rate of black people from Covid-19 are part of the problem of systemic racism. Communists support the government’s social distancing measures, although we believe they were implemented too late, and we have concerns about them being eased when deaths are still so high, and so we are clear that any demonstrations must be conducted safely.

The people of Bristol have at last destroyed the symbol of the city’s racist, slave-trading elite, which had the Merchant Venturers Society at its core. We will never forget the ruling class of Bristol’s involvement in the slave trade, but the destruction of its symbols opens up hope of a future where all are treated equally.

The London Recruits and South Africa’s Fight For Freedom