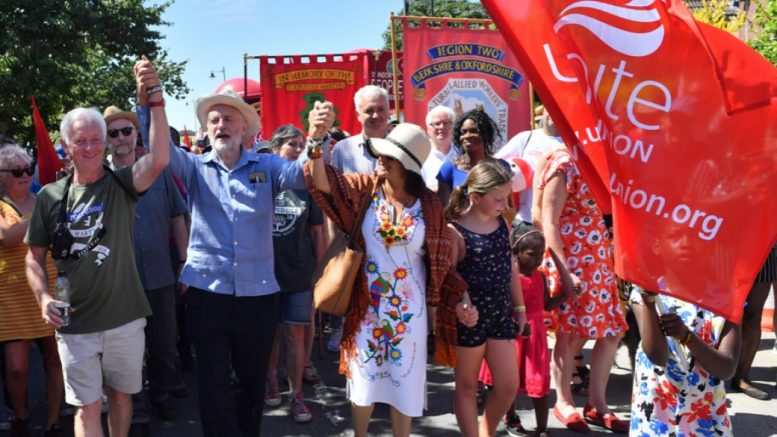 “IT WAS the best of times, it was the worst of times,” Charles Dickens once observed of the French Revolution. The situation in today’s Labour Party appears similarly contradictory.

A sustained bombardment from MPs who have always hated Jeremy Corbyn, amplified to deafening volume by the corporate media, saw the party’s national executive committee (NEC) give in over a contentious definition of anti-semitism on Tuesday, adopting in full a set of examples whose own author has warned they have a “chilling” effect on freedom of speech.

Corbyn’s attempt to have a clause added which would protect the right to denounce the racist nature of the Israeli state was both defeated and leaked.

Labour Friends of Israel director Jennifer Gerber was quoted in the Daily Mail about how appalling it was that he had even tried before the day was out — surely a sign that no matter how sweeping the concession, Labour cannot win itself even five minutes respite from its riotous right wing.

In the same week Corbyn’s supporters sweep the board in elections to the NEC and two constituency parties pass no confidence motions in MPs who have made a habit of rubbishing their leader. These developments suggest the left is in the ascendancy.

Tony Blair has no doubt that the left is in the stronger position, agonising over whether the party could ever be “taken back.”

The wave of indignation that has met his remarks is well founded. The chorus of trade union and Labour figures pointing out how positive is Labour’s shift away from the privatisations and illegal wars of the Blair era speak for millions.

Blair implies that the public are yearning for a new “centrist” political force, that is, one wedded unambiguously to free market capitalism, US global leadership and EU membership. Positing a Corbyn-Boris Johnson clash at a hypothetical election, he pleads: “I just don’t believe people will find that an acceptable choice. Something will fill that vacuum.”

He may once have been known as “the Master” for his supposed political nous, but this contention is pure fantasy.

Corbyn’s socialist programme, involving an extension of public ownership to our railways, post, water and energy, a redistribution of wealth and the resurrection of British manufacturing, is extremely popular. It brought the party its biggest vote increase in 70 years last year.

Support has held up through a summer of preposterous smears. A Survation poll last weekend put Labour on 41 per cent, four points ahead of the Tories and having actually increased support in recent weeks, a sign that the public at least see through the supposed anti-semitism scandal as a storm in the Westminster teacup.

The same poll showed the party that comes closest to Tony Blair’s vision of the “centre” — the Liberal Democrats — had dropped four points to a mere 6 per cent, lower than Ukip, which has gained ground as talk of a second referendum spooks Leave voters and is making overtures to the street fascism of Tommy Robinson and his supporters.

The left has little to fear from the much-mooted new centrist party. Nothing in British politics suggests there is any appetite for a return to the past.

Corbyn retains the overwhelming support of party members, who are starting to take action against MPs trying to sabotage his project. And yet a timidity at the top of the Labour Party remains, meaning the leadership is being manoeuvred into quite unnecessary retreats.

Those who wish to see Corbyn head a radical Labour government should grasp that victory will not come through parliamentary games or appeals to an irrevocably hostile media to calm down and see reason.

It will come through the mass action of a movement united behind his leadership. The confidence is present at the grassroots. There is everything to play for.

This article appeared in The Morning Star, Saturday 8th September 2018

Statement from the Communist Party.