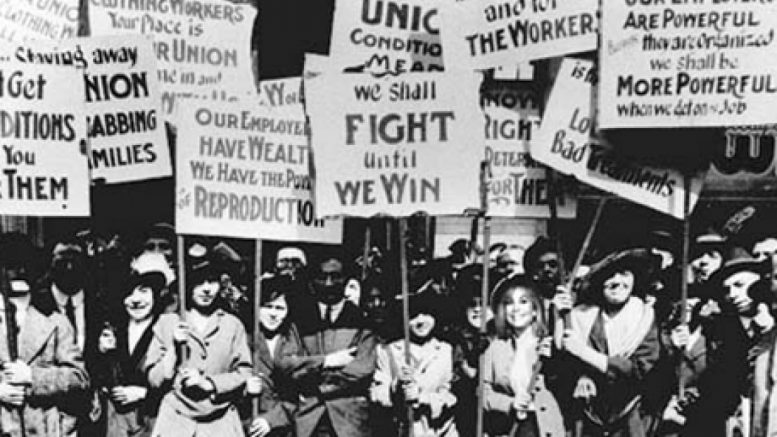 March the 8th is International Women’s Day (IWD), originally known as International Working Women’s Day. In the following article Jane Yates, the South West District’s Women’s Organiser, begins by giving a brief history of the event and the struggle of women for democratic rights and equality over the past 100 years and then argues that only socialism can bring true equality to all sections of society.

The article makes reference to Clara Zetkin, whose article Only in Conjunction With the Proletarian Woman Will Socialism Be Victorious can be downloaded from this website.

The first National Women’s Day was observed across the USA on the 28th February 1909. This was in accordance with a declaration by the Socialist Party of America.

In 1910 Clara Zetkin (leader of the women’s office for the Social Democratic Party of Germany) tabled the idea of an IWD at their second International Conference of Working Women. Over 100 women from 17 countries attended, these included representatives from unions, working women’s clubs, 3 women elected MPs from Finland and other women from Socialist parties. This was unanimously approved and the first official IWD was born!

International Women’s Day was honoured for the first time in Austria, Germany, Denmark and Switzerland in 1911 on the 19th March.

Over a million women attended rallies, campaigning to end discrimination.

However, on the 25th March the tragic ‘Triangle of Fire’ took place in New York claiming the lives of 140 factory workers, most of them women and Italian and Jewish immigrants.

The ‘Bread and Roses’ campaign associated with IWD came about as a result of this incident, demanding labour legislation on health and safety in the workplace.

Russian women observed their first IWD on the last Sunday in February 1913 campaigning for peace on the eve of World War One.

It was during this time, following discussion, that the date of March the 8th was agreed on for the official marking of IWD.

Selected women got the vote in Britain in 1918 voting for the first time in the General Election in December.

During the period 1912-1920 the Suffragettes, composed mainly of working class women, campaigned for the vote and social change.

Their weekly paper The Dreadnought, later The Worker’s Dreadnought, was edited by Sylvia Pankhurst. She was also a deeply committed anti-rascist and anti-fascist campaigner for over 30 years. Ethiopia became her home in the last 4 years of her life. She was eventually buried there. Sylvia’s political strategy linking gender with class struggle got her expelled from the Women’s Social and Political Union (WSPU) in 1918.

Those interested in this subject are recommended to read Professor Mary Davis’ book SYLVIA PANKHURST a Life in Radical Politics published by PLUTO PRESS 1999. Mary is an executive member of the Sylvia Pankhurst Memorial Committee.

For many years now the UN has held an Internation Women’s Conference to co-ordinate women’s rights. 1975 was designated as ‘International Women’s Year’!

Today in many countries across the globe IWD is a public holiday on the 8th March – with men traditionally honouring mother’s, wives, girlfriends and female friends with small gifts. Likewise children give flowers and cards to their mothers.

The key points in the history of the celebration of IWD on the 8th of March must however be followed by a mentioning the Marxist analysis of the ‘women question’ and the bigger picture of class struggle.

The oppression of women is rooted in class exploitation, Sylvia Pankhurst understood this very well!

The excellent pamphlet by Mary Davis, Women and Class published by the CPB, states that the eradication of class exploitation is the precondition for the liberation of women. She goes on to explain that socialism provides the only means by which the most complete form of class exploitation – that represented by the capitalist system – can be ended.

A Charter for Women

Clara Zetkin on Women and Socialism

Be the first to comment on "International Women’s Day"