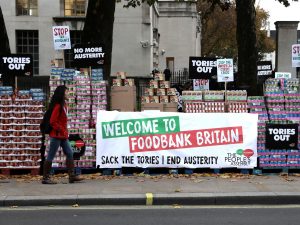 CHANCELLOR Philip Hammond’s rehash of previously announced spending plans can be seen as a Budget damp squib, but it is also sinister.

Hammond shares the strong EU Remain position of Theresa May and, like her, backed David Cameron and George Osborne’s original Project Fear in the 2016 referendum, warning that, if we voted to leave, an emergency Budget slashing public spending and raising taxes would be immediately necessary to fill a £30 billion “black hole.”

Not as a result of leaving the EU but as the direct consequence of voting the “wrong” way.

For all their “Brexit means Brexit” rhetoric, May and Hammond have sought all along to engineer an exit in name alone, where Britain vacates its seat at the EU decision-making table but abides by EU rules and European Court of Justice judgements.

Hammond took this process one step further at the weekend, warning that, in the event of no deal with EU negotiators, he would draw up an emergency budget and drop supposed government plans to to end austerity.

This is a veiled threat to Parliament to back whatever cobbled-together Brexit deal May agrees with the EU or face a choice between not leaving the EU and a fresh assault on workers’ rights and living standards.

Shadow chancellor John McDonnell’s assertion that the Chancellor is planning to revert to a plan first floated in January 2017 to turn Britain into an offshore corporate tax haven is well founded.

This would fit the approach of many Tory Party free-trade zealots dedicated to a small-state, low-tax economic model dominated by the City of London finance sector.

McDonnell is equally correct to say that this so-called Singapore-style model would undermine Britain’s manufacturing potential and put people’s living standards at risk.

May and Hammond declare that the era of austerity is over and claim that this is because everyone pulled together and made sacrifices to enable the economy to recover, but this is absolute cobblers in spades.

As the Chancellor said in his Budget speech, while austerity will end, “discipline will remain,” which will prove remarkably similar for working people.

The capitalist austerity agenda inflicted on working-class living standards through slashing wages and state benefits was always politically based rather than an economic necessity.

It was intended to intensify the already existing process of reducing the proportion of national income allocated to the working class through pay, pension and state benefits in favour of corporate profits. And it has worked a treat.

The Tory assertion that austerity is over is meaningless unless local authorities starved of finance receive the funds necessary to reverse the cutbacks they were forced to implement.

Hammond’s award of a one-off “bonus” of £400 million to enable schools to buy unspecified “little extras” to make up for a decade of cuts is nothing short of insulting, since it is nothing like the sum needed.

Similarly insulting is his fanfare announcement of £4 billion for mental healthcare when this has to come from the re-announced £20 billion promised to the NHS, which all health providers consider utterly inadequate.

The Chancellor, like his predecessor Osborne, makes much of his decision to lift some low-earners out of income taxation by raising the personal allowance to £12,500, but the effect of this, plus upgrading the higher tax band to £50,000, will benefit high-earners disproportionately.

The Tories and their City friends are celebrating another Budget bonanza, but working people face further years of austerity under its new name, discipline.