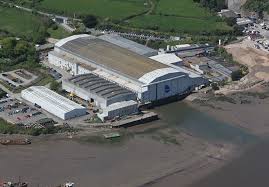 THERESA MAY’S government and Babcock International must come clean on why they have jointly pulled the plug on the Appledore shipyard in Devon and this act of industrial wrecking should be rectified.

Appledore plays an important role in the local economy, providing well-paid jobs for 200 skilled workers and positive knock-on opportunities for the community, selling supplies to the company and services to the workforce.

Closure will be a personal tragedy for the workers and their families and also depress people and businesses throughout the region.

Unite assistant general secretary Steve Turner is correct to point out that government ministers could guarantee the future of Appledore and other shipyards across Britain by awarding contracts to build support vessels for Royal Navy ships in home shipyards.

Other EU member states, facing similar regulations on competitive tendering, have experienced little difficulty in ensuring that military vessels are built in their own yards.

Despite Britain spending more on preparations for war than any other Nato state with the exception of the US, a neoliberal obsession with competition has caused closures and job losses across the board.

Many people in Britain believe that too much expenditure is devoted to military spending when there are so many other critical areas, such as social care, that are denied investment.

But it beggars belief that an elected government would spend taxpayers’ money on military hardware said to be essential and then award contracts overseas even if, as is so often the case, it leads to factory and shipyard closures that devastate economically depressed areas.

Given that we are supposed to leave the EU in March, there is even less justification for honouring regulations that other EU partners find no problem in bypassing.

Labour is committed to using procurement contracts as a way to increase skilled engineering jobs and apprenticeships through reconstruction of manufacturing.

The PM and Chancellor Philip Hammond are more concerned with the City of London finance sector, as leaks from ongoing negotiations over leaving the EU indicate.

Defence Secretary Gavin Williamson appears obsessed with engaging in name-calling against Russian politicians rather than taking responsibility for shipyards and their workers.

His statement that Babcock has the right to make a commercial decision ignores the reality that the company is largely dependent on government contracts and he has a responsibility to influence any closure decision.

This decision must be brought before Parliament so that skilled workers’ jobs and their community may still be saved.